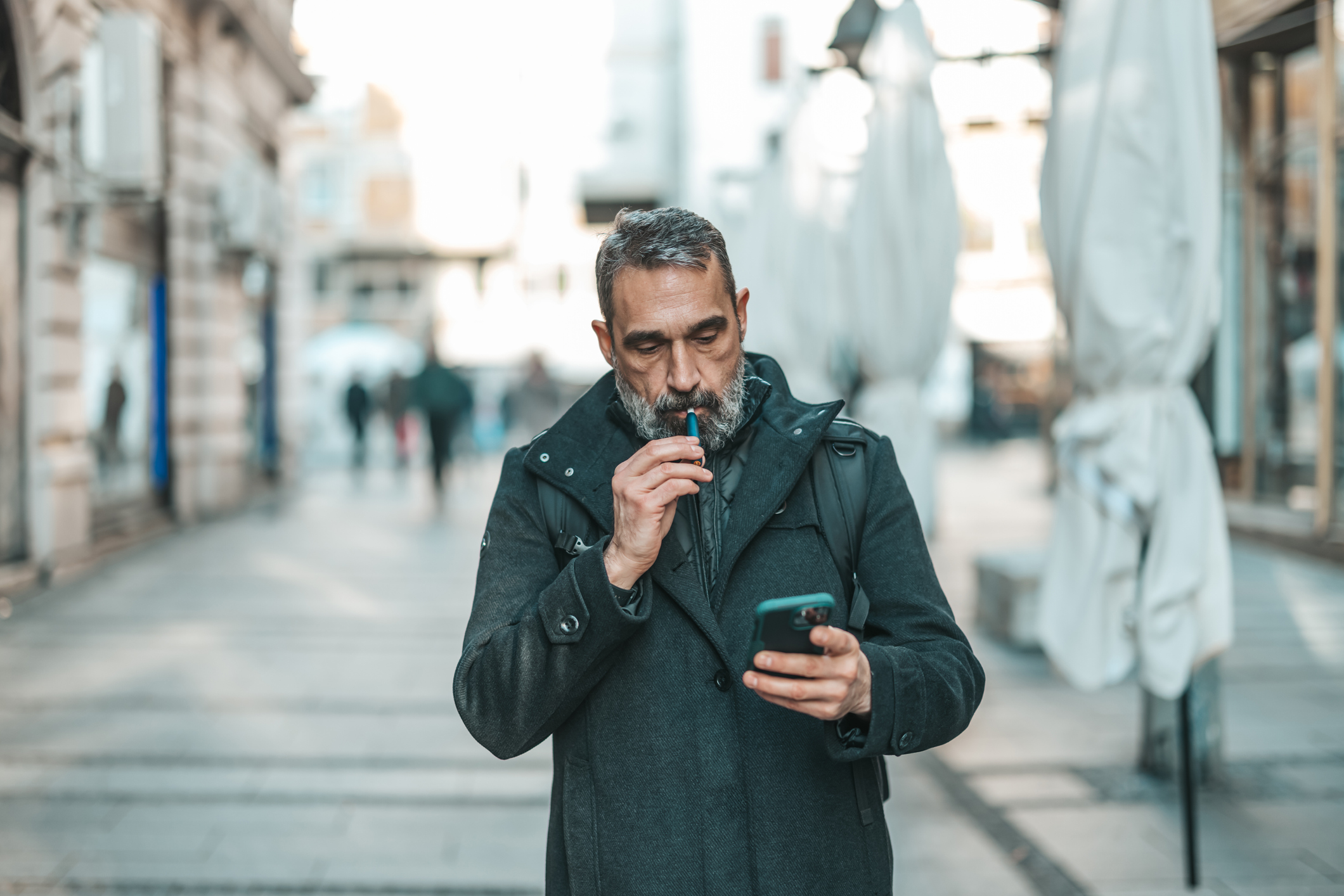 E-cigarettes have the potential to achieve tobacco harm reduction as part of a controlled off-ramping journey – but there are roadblocks along the way.

Smoking cessation through nicotine replacement therapy (NRT) relies on the off-ramping of smokers through successive reductions in nicotine concentration of the NRT product until the smoker is no longer dependent on nicotine. This off-ramping journey with NRT has been used for many years to help smokers quit. A similar approach can be used with e-cigarettes or electronic nicotine delivery systems (ENDS). This article explores how this may be achieved and what impediments exist.

Tobacco harm reduction is a decrease in the health impacts of using combustible cigarettes or other combustible tobacco products such as pipes or cigars. THR may be achieved by smoking cessation or switching to alternate sources of nicotine.

While the percentage rates of smoking are generally decreasing worldwide, the total number of smokers continues to rise with rising populations. Across the world, this picture varies, with the rates of smoking in developed nations generally decreasing, in fact, if the rate of decline in smoking in the UK continues, the country may reach smoke-free status (less than 5% smokers) by the 2030s. Smoking rates across Europe, North America, and potions of Asia peaked in the 1960s to 1970s. However, smoking rates in some developing nations continue to rise, with Africa, most regions of Asia, and portions of South America showing increases in smoking rates. Differences in the health and financial impacts of smoking are also found in different communities within the same country. The use of combustible cigarettes results in 7.7 million deaths globally every year, 480,000 of which are in the US. A further 16 million Americans currently live with a smoking-related disease. Exposure to second-hand and third-hand smoke can also lead to smoking-related diseases and death.

Generally, over 70 % of smokers say they want to quit, and approximately 50% attempt to quit every year. Despite the motivation, quitting smoking is hard, and smoking cessation success rates are much lower, with less than 10% succeeding. Of those who attempt to go ‘cold turkey’, 85% fail immediately, and about half of those who stop, completely relapse within just 15 days. Nicotine withdrawal symptoms can take over four weeks to dissipate, and behavioral trends can take even longer. Off-ramping of smokers is most successful when conducted well beyond the period of withdrawal symptoms and when combined with appropriate counseling.

NRTs such as gum, patches, lozenges, tablets, and nasal sprays, have been successfully used to off-ramp smokers, including pack-a-day or higher smokers. In one example, using a nicotine patch for 12 weeks at a high dose and a 6-week taper at two lower doses, a 25% success rate was obtained compared with the cold turkey 10% rate. However, there are some drawbacks to NRT, as most NRTs have a shallower PK curve, so nicotine blood plasma concentrations do not spike as quickly as a cigarette, therefore not providing the instant ‘satisfaction’ associated with the use of combustibles. Gum, inhalers, or tablets may not reach 50% of the blood plasma nicotine concentrations observed in cigarettes and can take up to 30 minutes to get to that point. Additional limitations can include the cost of products and geographical differences in access, along with not supporting the ‘hand-to-mouth’ habit, a very strong behavioral habit in smokers.

E-cigarettes have been demonstrated to be more effective in promoting smoking cessation compared to NRT. The PK curve for e-cigarettes is closer to cigarettes, and typically, a slightly lower peak blood plasma nicotine concentration is achieved, which is important to limit addictiveness concerns. Furthermore, e-cigarettes, in general, maintain the hand-to-mouth habit. Yet significant perception and regulatory impediments are stopping e-cigarettes from reaching their THR potential.

E-cigarettes have a genuine public perception problem in the US. Initial concerns around the presence of carcinogens and toxins in the mid-2010s grew into bigger concerns around the youth vaping epidemic in the late-2010s, coupled with the e-cigarette, or vaping, product use-associated lung injury (EVALI) outbreak that peaked in September 2019. National and state data from patient reports and product sample testing showed tetrahydrocannabinol (THC)-containing products associated with vitamin E acetate were strongly linked to the EVALI outbreak, not e-cigarettes as widely reported. Public perception of e-cigarettes in other countries, particularly in the UK, is more favorable, where the THR potential of the product has been accepted.

Government regulations can affect availability and access to e-cigarettes for off-ramping and may also affect public perception of products. There are currently 41 countries that ban nicotine-containing e-cigarettes, including India, Australia, Argentina, and Japan. The sale of e-cigarettes with restrictions is permitted by 66 countries, with 32 of the 66 countries regulating nicotine content. Governments may also restrict the type of nicotine used (synthetic or tobacco-based), flavors within specific products, or other restrictions such as the volume of tanks or total volume of e-liquid sold.

A lack of combustion with e-cigarettes and NRT products reduces the harmful and potentially harmful constituents (HPHCs). In addition, e-cigarettes do not generate the tars and polyaromatic hydrocarbon combustion products produced by combustible cigarettes that can cause health issues to smokers. Some e-cigarettes have demonstrated reductions in non-cancer and cancer health risks as high as 90-99%. In the last few months in the US, there has been emerging acceptance of e-cigarettes as appropriate for the protection of public health (APPH) through the issuance of pre-market tobacco application (PMTA) marketing orders.

Off-ramping journeys across the world

Smokers wanting to use e-cigarettes to help them quit smoking face different conditions depending on where they live. In the US, a controlled off-ramping journey from high nicotine to low or zero strength is possible, but a ban on flavored pods and potential restrictions on menthol could deter some smokers from switching. Higher strength nicotine e-cigarettes are permitted, comparable to one pack a day or higher.

In the UK, regulations require tanks no greater than 2ml, with maximum e-liquid volumes limited to 10ml and nicotine strength limited to 20mg/ml. The controlled off-ramping journey from high nicotine to low or zero strength may be limited by restrictions limiting nicotine for pack-a-day smokers or greater. European regulations are like the UK, while other countries where complete bans exist will obviously impact the ability of smokers to off-ramp through e-cigarettes.

The future of tobacco harm reduction

For e-cigarettes to play a key role in THR, several changes need to happen; public perception in key markets needs to shift more in favor of these products; medicinal registrations of e-cigarettes may increase affordability and improve perceptions, while regulatory changes in banned or restricted countries will improve access for smokers.

The creation of bespoke off-ramping journeys for smokers using e-cigarettes, with medical supervision at the higher concentrations most often associated with abuse liability, will provide new impactful opportunities in the global market – and provide smokers with a more effective means to stop smoking.

Contact us to book a meeting and let’s discuss how together we can advance a smoke-free future.